Posted by Olga on February 15, 2015
As I wrote in one of the previous posts WISE is about creating a smart Information System. One part of the process are semantics and agent technologies.

Semantic language is used to prepare data for computers. As semantic language is designed to follow words meanings and notations. In ideal semantic converted world every word in every language is defined and explained, therefore computer systems would be able to understand meanings of sentences and words. For example if there would be 2 phrases 'computer mouse' and 'mouse in a computer', the system would understand that first one talks about a pointing device. While the second one would mean a mouse as 'a small rodent' in the computer (this is very a very simple way to put). Such a technology would make it easier to make a computer system understand human language and also to express itself dynamically, not with a static sentences which programmer put into.

Agents or software agent is a software program which acts on user's or another program's behalf. Intelligent agents support learning and reasoning. Therefore a goal to create an agent as a system which would be able to adopt to the environment and make dynamic decisions towards a big assigned goal. Agent technologies are useful in various areas of our lives - space and deep ocean explorations, repeated tasks in every day life, distributed databases, routing and etc. Such systems would use the semantic language for communication, decision making and learning.

So we got two courses on each subject I mentioned - introductory and advanced. During the introduction we just learn about the concept and formulation. In the advanced level, we try to build and use the technology while programming some systems ourselves. From those courses joined skills would help to build an intelligent computer system. Or participate in Artificial Intelligence course (it would start for me in couple of month).

25th Summer School at Jyu is starting in August. List of courses is looking impressive. Check it out and enroll. There are various courses for Masteräs, PhD and post-docs student. There will be visiting lecturers from USA, Sweden, Argentina, Germany, Portugal and more. Summer school also offers different summer activities outdoors and trips. Read more and enroll.

10 Reasons for studying IT in JYU

1. Broad selection of courses : programming, security, AI, semantics, data mining, information systems, IT management and more. 2. IT project participation opportunities. 3. IT companies with a university cooperation where one can get a practical training, part-time job or thesis topic. 4. Top quality hardware and software classrooms. 5. Agora Center and research institute. 6. Jyväskylä - city of Alvar Aalto. 7. Rich landscape. JYU photo archive 8. No tuition fee. 9. Various free-time activities in both summer and winter. Starting from basic ones such as skiing, skating, snowboarding in winter, and swimming, sailing, fishing, hiking and more. 10. International students and staff. 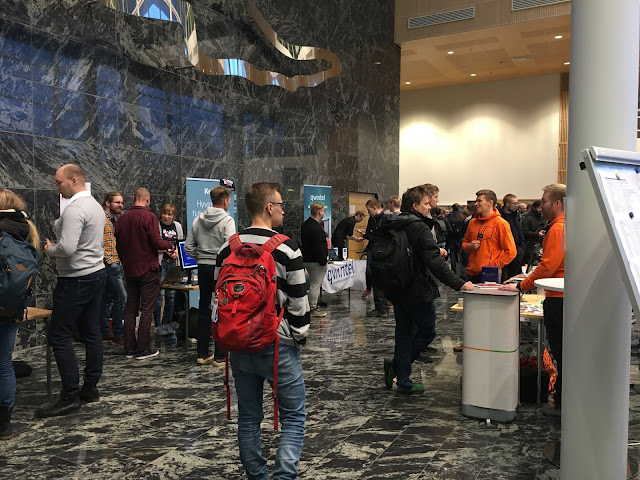 DuunIT 2019 Agora 5.11-6.11 DuunIT is an on-campus recruitment fair, held every autumn, specifically targeted at the students of the IT faculty. For students, it’s their great opportunity to find an internship or junior position in the field of their interest. photo by Yindong This year, the number of participating companies grew from 35 to 40, from various areas, including IT services, civil engineering, business consultant, banking, accounting, government administration, etc. This year students could also win a lottery (free lunch for 30 days!) if they visited 2 companies in both days. picture by Duunit-messut picture by Duunit-messut At DuunIT you can talk to their HR or even CTO about your career plan, and may end up with a job interview! Although this is organized by IT faculty, Cogito Association, Dumppi Association and Linkki Jyväskylä Association, it welcomes job hunters from other fields too. picture by Duunit-messut